Election Day for voters all across Texas is finally here! Tomorrow, March 1st, voters will head to the polls to cast their ballots and play an impact role on selecting our party's presidential nominee! If you need to know you polling location or want to look at a sample ballot before heading to vote, you can look it up here.

After you vote tomorrow, we encourage Republicans to return to the polls after they close at 7 p.m. to participate in their precinct conventions. Precinct conventions convene at your precinct polling place the evening of March 1, 2016, at 7:30 or after voting ends, whichever is later.

As you may have heard, the RNC has rescheduled the Houston Republican Presidential Debate to Thursday, February 25th the night we had scheduled our Lincoln-Reagan Dinner. With this debate update, we are rescheduling the Lincoln-Reagan Dinner to Wednesday, February 24th at the same venue, Bayou City Event Center. We apologize for the inconvenience that this may cause and we will be refunding tickets to anyone who is no longer able to attend.

Governor Rick Perry appointed Devon Anderson Harris County District Attorney on September 26th, 2013. She succeeds her late husband, Mike Anderson. On November 4th, 2014 she was elected by the voters of Harris County to complete her husband’s term. Devon Anderson was a prosecutor for 12 years at the Houston DA’s office trying some of the worst criminals including, the “Railroad Killer,” Angel Maturino Resendiz. Devon rose through the ranks of the office prosecuting offenses at every level. She was a Chief Felony prosecutor for 5 years and tried over 100 felony jury trials including 7 capital murders.

In city elections, candidates do not run by party and there is no primary election for voters to choose a Republican nominee. Therefore, the Harris County Republican Party will give voters information so they can ensure Houston has the best leaders possible. For survey responses, voting history, and contact info on candidates running in the 2015 Houston city elections, visit HarrisCountyWorks.com. 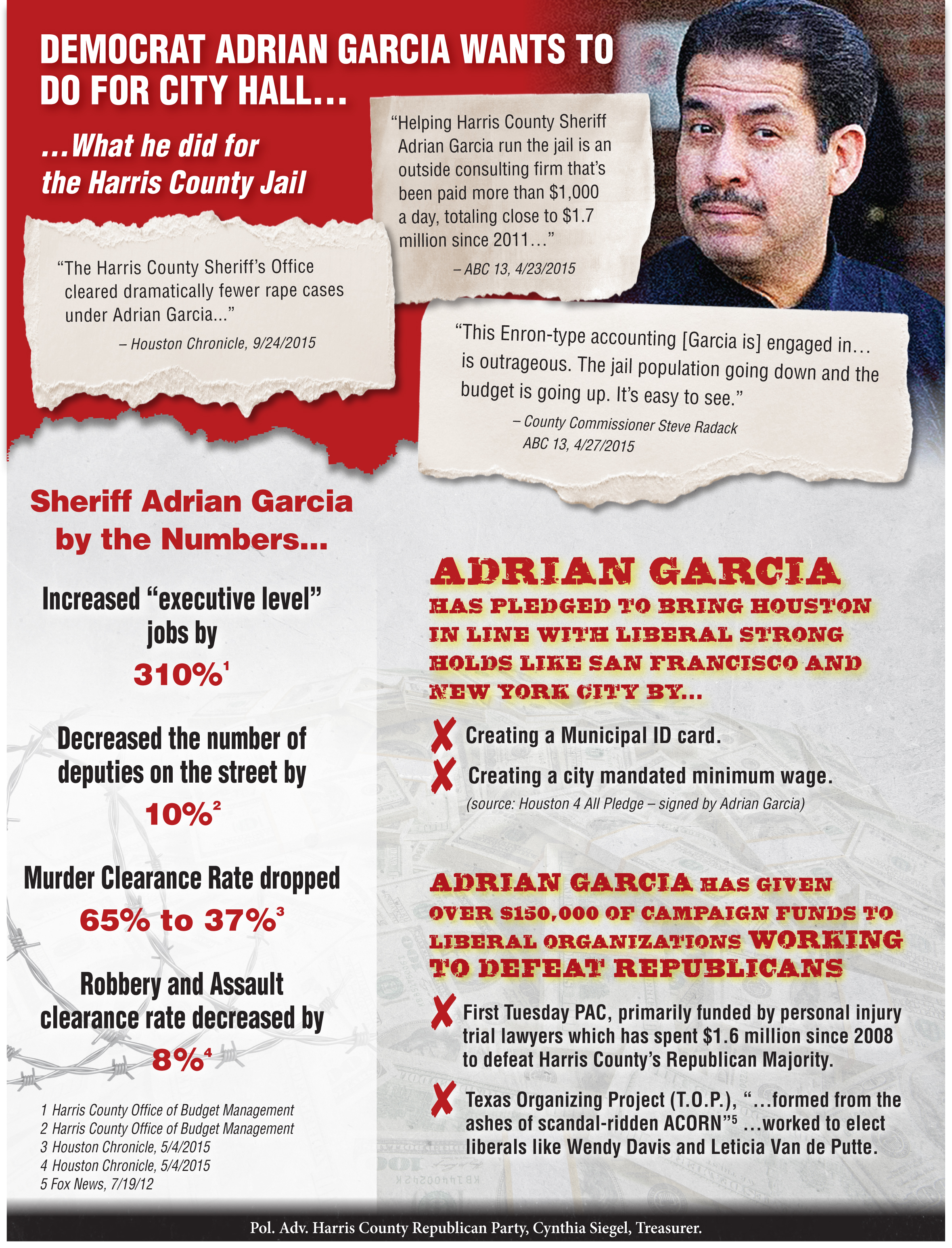 The Truth About Ben Hall

This week, the Harris County Republican Party began its promised campaign of identifying the liberal Democrats running for Houston Mayor.

Prior to serving in Congress, Ted Poe served for 22 years as a criminal court judge in Houston where he garnered national media attention for his innovative sentences – dubbed “Poetic Justice.” Prior to that, he served for 8 years in the Harris County District Attorney’s Office, where he became the chief felony prosecutor and never lost a jury trial.

Congressman Ted Poe serves on the House Judiciary Committee and the Foreign Affairs Committee as Chairman of the Subcommittee on Terrorism, Nonproliferation and Trade. An outspoken advocate on border security, he travels regularly to the southern border to meet directly with local law enforcement and residents. He also often visits our troops in Afghanistan and around the world. Congressman Ted Poe established the bipartisan Victims’ Rights Caucus (VRC) to advocate on behalf of victims in our nation’s capital. A strong constitutionalist, Congressman Poe stands firmly in the belief of “we the people” not “we the subjects.”

Your Houston News, August 19- As the chairman of the Terrorism, Nonproliferation and Trade subcommittee, Congressman Ted Poe works to deal with the aspects of these three prominent issues currently being dealt with in Washington, D.C.. Poe delivered a speech concerning these three issues during the Focus on the Federal Government luncheon hosted by the Lake Houston Area Chamber of Commerce.
Click to read the story

HCRP Statement on shooting of Sheriff’s Deputy over the weekend

In the wake of the horrifying shooting of Sheriff Deputy Darren Goforth, a 10-year veteran of the force, Harris County residents and law enforcement have chosen peace and solidarity and refused hate and rage.

“District Attorney Devon Anderson and Sheriff Ron Hickman provided the necessary leadership to unite people not only in Harris County but throughout the country,” said Harris County Republican Party Chairman, Paul Simpson. “Over the weekend we saw a response from our Republican leadership in law enforcement unparalleled in this country. Sheriff Hickman and District Attorney Anderson were a calm and uniting force focused on justice for officer Goforth and the message that lives matter.”

Hickman was careful to avoid jumping to conclusions or using rhetoric that could escalate the sensitive situation, "The general climate of that kind of rhetoric can be influential on people to do things like this. We're still searching to find out if that's actually a motive," he said. Hickman made an emotional appeal that "Cops lives matter, too," and added “So why don't we just drop the qualifier and just say Lives Matter, and take that to the bank."

Congressman Culberson is a member of the House Appropriations Committee, which is responsible for funding the federal government. His position on the committee allows him to rein in federal spending and promote less federal regulation and more local control. His subcommittee assignments include the Commerce, Justice, Science (CJS) Subcommittee, Homeland Security Subcommittee, and the Transportation Housing & Urban Development Subcommittee.

Congressman Brady holds key leadership posts in Congress including Deputy Whip and Vice Chairman of the Joint Economic Committee. He is a senior member of the House Ways & Means Committee - - considered by many to be the most powerful committee in Congress with jurisdiction over taxes, health care, Social Security, Medicare, international trade and welfare.

Congressman Brady is the chairman of the influential Health Subcommittee for the House Ways and Means Committee. As chairman, he will focus on ensuring a strong, free market in the nation's health care industry and look for ways to increase the quality of health care, while keeping costs low

County Judge Ed Emmett, first elected in 2007 and most recently re-elected in 2014, serves as the Cheif Executive Officer of Harris County.  Judge Emmett is responsible for overseeing the county government along with the 4 elected County Commissioners. In 2007, Judge Emmett oversaw the largest tax cut ever approved by Harris County, reducing the ad valorem tax rate by a full penny.  Under Judge Emmett's leadership, Harris County has received AAA Bond ratings and is financially sound. Harris County does not face the economic problems that the City of Houston faces, in large part due to the conservative leadership of our County Judge.