Will Democrat Lawmakers Turn Their Backs on Voters?

In light of President Trump’s Executive Order rightly returning the power to the state to protect its citizens,
Will Democrat Lawmakers Turn Their Backs on Voters?

In 2015, a broad coalition of Houstonians resoundingly defeated former Mayor Anise Parker’s so-called HERO ordinance (61%--39%) that would have let men into women’s restrooms and burdened private businesses with needless regulation.

Houston is the only major metropolitan where voters have had the chance to cast a ballot on such an issue.  In that historic election, a broad coalition of ethnically and culturally diverse voters came together to overwhelmingly reject the liberal elites’ inane bathroom policies.

“Lt. Governor Dan Patrick and the Republican State Senate delegation heard that message from voters loud and clear: get the government out of our bathrooms,” said Harris County Republican Party Chairman Paul Simpson.  “For too long the Democrat liberal elites have taken the will of the voters for granted and have continually attempted to push through their radical agenda.”

“Senator Lois Kolkhorst and the Republican co-signers should be commended for authoring a bill that stands up for our conservative principles by limiting government intrusion, treating everyone equally and protecting private business from pointless regulation," continued Simpson.

Harris County Democrats should follow the will of their voters by supporting the Privacy Act.  To ensure they do, the Harris County Republican party is launching a campaign to show that Democrat Representatives are pushing the voters’ will aside for a more radical agenda.

Democrats made up more than half the vote in the 2015 HERO election.

61% of all votes cast AGAINST the measure were from Democrat State Senate Districts.

57% of all votes cast AGAINST the measure were from Democrat State House Districts.

59% of all voters in Democrat Senate Districts voted against the measure.

59% of all voters in Democrat House Districts voted against the measure.

The HERO Ordinance passed in only 2 of the Democrat legislative districts in Harris County. 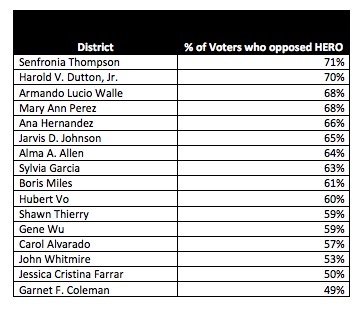